What is Authoritarian Parenting? 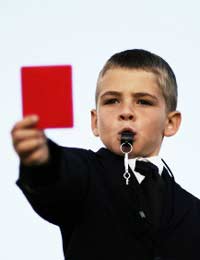 The majority of parents adopt a number of parenting styles and methods, preferring to look at their child as an individual rather than following a definite style of bringing up their children that they may have read about.

The most old fashioned and outdated of all of Diana Baumrind’s parenting styles has to be the authoritarian approach to bringing up children. Parents who adopt this style of parenting have often been raised in the same way by their parents and have extremely high standards of behaviour and respect.

Authoritarian parents focus on shaping, controlling and evaluating the behaviour of their children by using a set code of conduct that is based on the child having total respect for authority.

Parents place a high value on obedience as a good thing, and will use forceful measures to ensure that their child’s behaviour is maintained at all times. This type of parents shows little flexibility, and children are very much kept in their place.

Children are given very strict boundaries and guidelines for behaviour and how they should live their lives, and are not really considered in decision making processes as they are not given choices or encouraged to make their own decisions.

Authoritarian parenting involves keeping children in their place, having restricted autonomy, and household chores, jobs and duties figure highly on their agenda. Children who are parented using this style are given jobs to do around the house, as parents believe that having this level of responsibility will encourage the child to have respect for adults and therefore a certain standard of behaviour will be maintained at all times.

Parents who use this style of parenting do not encourage any level of discussion or give and take, basically their word is law and their children have no choice but to do as they are told. Children are told that they must do as they are told and there is no flexibility or discussion allowed about any situations that may arise within the family unit.

Authoritarian parenting involves being in control and exerting that control on their children. Parents who set these strict rules do it to keep order and do this without any warm emotion or affection. They try hard to set standards of behaviour and are harshly critical of their children if they fail to meet those standards. They actively tell their children what to do and how to behave, and their children have to accept it.

Children who are subjected to authoritarian parenting rarely learn to think for themselves and struggle to understand why their parents behave the way they do. Authoritarian parenting is out dated and not suited to modern life and society, it is not considered to be an appropriate parenting style for today’s family.

The Origins of Parenting Styles

What is Permissive Parenting?